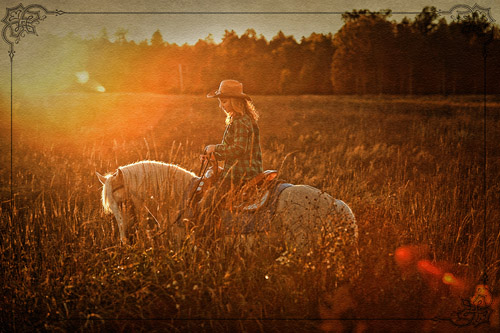 My daughter had a horse.That’s her above, with Flash.

We bought it for her after she had been riding and taking lessons for three years. Lucky kid.

It’s a passion of hers. At least she’s not into hockey and hauling my sorry butt out to games and practices at 5:00AM like so many hockey parents.

I’ve been reading books on horses and one of the most fascinating persons out there is Monte Roberts, the guy who they loosely based the character on in the movie “The Horse Whisperer”.

Amazing man and amazing life. The book is called “The Man Who Talks to Horses”. I highly recommend it.

In the book there are three very powerful success lessons. I kept going back to these three over and over and would like to share them with you right now.

Lesson #1: When Monte Roberts was younger his father entered him in all kinds of horse competitions. He even bought a train rail car that they would load him, his horses, and a chaperon/tutor onto and then attach to the main locomotive and travel all over California competing, and mostly winning much needed cash prizes.

At these events they would also put on seminars. This would give them a little extra cash and help pay the bills. Monte talked openly about the true key to success when all the young riders would enter the pen where they were to have the seminar. They were all smiling and bright eyed, eager to learn. This frustrated Monte in a way.

You sorta get the sense that he felt like a fraud.

Why? Because, as he describes in the book, a seminar wasn’t going to teach them much of anything. He goes on to explain that the reason he won so many competitions was real simple, and it wasn’t because of any particular knowledge or skills he possessed.

The fact is he worked at it. A lot.

Up every morning, working with horses from about 6:00 AM all day until way past sunset. He rode horses day after day, week after week, month after month, year after year. That, in his opinion, was the true “secret” to his success. Simple uh?

Lesson #2: Monte Roberts was in his early twenties, married, three young babies and living in a old decrepit house on a ranch where he was trying to build his dream. He was frustrated and hungry, barely surviving month to month.

Someone suggested he go and work for a particular person who was highly respected in the horse world. He took this advice and called the guy.

This person told him it would cost Monte a fee and he’d have to feed himself, house himself and take care of all his own expenses and he fully expected Monte to act on his advice that was to be dispensed to him at the end of his stay. Monte agreed and worked his butt off for about 4 weeks for this guy.

Now remember, this guy was going to charge Monte a fee for this opportunity. He asked Monte a lot of questions and at the end he sat down with Monte for his final analysis and reckoning.

He told Monte that he thought Monte had some skills but needed some more work.

He also told Monte that when he returned he was to call one of his only three clients that he was training to come by and pick up his horse the next day because the horse was “un-trainable”.

This freaked out Monte. He only had three paying clients.

This would mean a drop in income by one third. He was already starving and barely making ends meet. But he promised to act on the guys advice.

That was a lot of money.

Whoa! What a hard lesson to swallow.

As soon as Monte got back he did what he promised. He called the client with the un-trainable horse and “fired” the horse. The guy yelled at him and hung up. Monte was freakin! What was he doing?

Two weeks later he gets a call from someone else who had a horse that needed training. The guys who Monte fired referred Monte. He recommended Monte because, as he said “he’s the most honest horse trainer I’ve ever met”.

And that was the start of his good fortune and the foundations for his success. He eventually paid off the entire bill by the way.

And you could too?

First off it wasn’t below him to go seek the help of a “master”. A coach. (By the way the cost/effort/hardships he incurred was a microscopic, teenie eenie weenie percentage of the long term effect it had on his life and his destiny.)

Secondly, it took faith and nerves of steel to call his client and fire him. This alone was worth the cost of admission. This alone gave him guts, courage and “brass balls.” Life long skills that are essential in business.

Lesson #3: Although this one happened more recently it has it’s roots when Monte Roberts was young and still in grade school. A teacher gave a project to all the kids.

They had to write out their long term goals and descriptions of what they will be doing when they were older and on their own. Seems Monte had grand visions of a huge horse ranch and many horses.

The teacher gave Monte an “F” with the remarks to be “a little more realistic”.

Monte’s mom told Monte to make no-never mind, so Monte handed the project back, as is.

Years later this same teacher, now retired and quite elderly but still mobile, showed up at Monte’s ranch with a tour bus load of seniors.

He had called weeks prior and made arrangements. When they all got off the bus the teacher made an announcement to everyone.

He introduced the crowd to Monte and said that Monte had taught him a very valuable lesson about never underestimating another person’s dreams and hopes.

You can tap into a goldmine of photography tips over at the worlds greatest online photography forum, NoBs PhotoSuccess if you really want to ramp up your work and marketing.