There is NO better place and time on earth.

Breezing down the highway on my two wheels. The smell of forest, grass, flowers and diesel exhaust from the trucks blowing by me.

Fun. Me loves my motorcycle.

Oh, let’s not forget….the occasional bug zipping into my mouth or blasting into oblivion onto my cheek.
Stings. Ouch. Keep it real.

Yes, fun. Loads of it. Nothing better for the soul.

A friend who I haven’t seen in a while contacted me to go for a ride.

Guys do that when they own motorcycles. They just go for “a ride”. No where really.

We breezed by the local Tim Hortons earlier as we headed out of the city.

The parking lot starting to fill up with Harleys. Some guys like to park their bikes in the parking lot, stand around and talk while getting fat on donuts.

Not I. I’m way too anti-social. I like to get out there. The open road is calling me.

As were riding along, I double duty multi-task, keeping a close eye for anything that might hop out into the road and I also let my mind drift into creative thought.

I get some weird ones. You don’t wanna know.

One thought popped into my head. Being chased by a giant T- Rex….

Wouldn’t that be awesome!

“How was your ride” Tina would ask when I returned later.

“Awwww nothing much happened. We had fun. Got chased by a giant dinosaur.”

I come up with these ideas because I like to ask weird, deep probing questions.

Questions like: “If a T- Rex starting chasing me now, could I outrun him?”

Isn’t that a cool thing to know? Someone outta look into it. I think I’ll contact the Myth Busters dudes…

And then another image pops into my head. One I saw not so long ago on FlakeBook… where there was a T-Rex chasing a bridal party.

“Hmmm, maybe I should swipe that idea…” I thought. 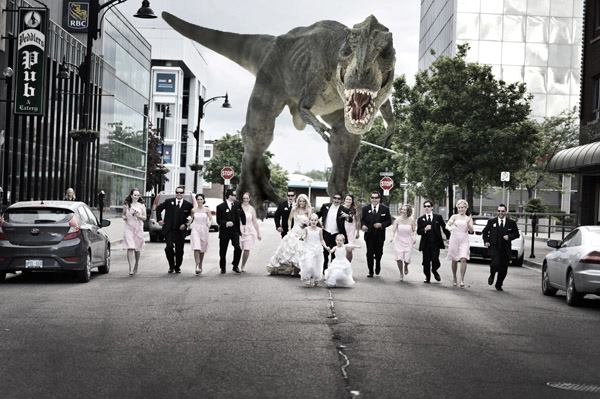 And then I started thinking about work.

Dam! It always reverts back to work. But I’m getting better at pushing those thoughts aside.

I was thinking about the current wedding I was working on and how I had to get on it. I’m falling behind.

I push the thought aside. I feel better because I make a commitment right there to put in 30 minutes later on that night, which I do.

And I go buy a stock image of a T-Rex. And I place it on one of my bridal party running shots I routinely take on just about every wedding.

Is it flaky? Who knows? I’ll let the bride decide. She gets the big vote.

In weddings, there is only ONE real solid idea that works. One trend….

Here it is: Capture the heart and soul, the story of the wedding day using the best in composition, documentation, light, timing, your creative eye.

It’s not about anything else. Not the equipment, cool off camera flash techniques or anything other than your ability to create images that resonate.

But so is  a musical scale when you think about it. And look what the likes of Rachmaninoff created with musical scales.

But achievable for the dedicated.

It’s why I created my wedding success system and so many other videos from the likes of Vanessa Joy…. For the serious “Rachmaninoff” photographer in you who wants to totally crush their wedding photography.

Meanwhile, may you find your zen like state where images of being chased by T-Rex’s join all your other thoughts….

P.S. Last month with had international photographer Chad Pennington show us how he creates amazing expressions and unique, soulful images of couples…. Replay in the forum HERE

P.P.S. Also, last month, Travis Gadsby gave us some cool insider secrets and strategies… “Maximizing your online presence with software that does the heavy lifting.” In the forum HERE.