A while back I hosted a webinar with John Hartman on his light painting style. Admittedly, one can’t cram too much into a 1.5 hour online webinar.

John puts on a three day workshop to teach this stuff. You can see more info on John’s light painting workshops HERE

That didn’t stop me from giving it a go. I thought about it long and hard, and came up with my own fast and easy light painting hack.

Here it is…..first thing I did was create a custom white balance based on the LED lights I was using. I don’t shoot raw, so, in theory, this should solve the problem.

Here’s the grey card set up I used to create a custom white balance. 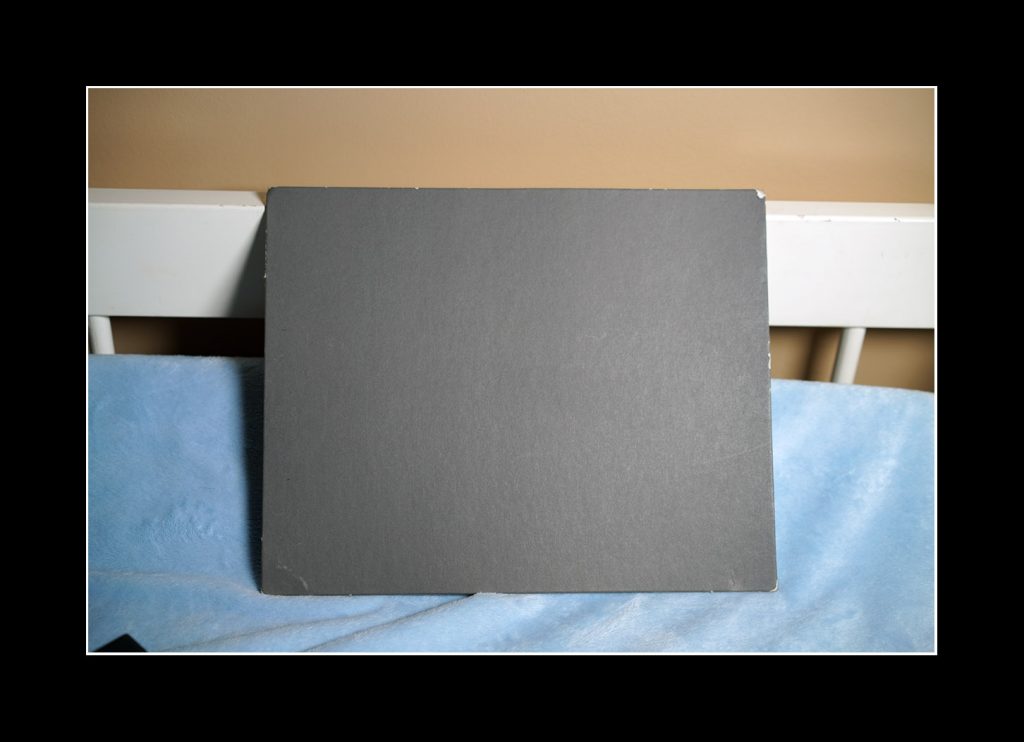 I scoped out locations weeks prior to the shoot.  I had the car ready to go, a 2006 limited edition Ford Shelby.

I decided on an area that looked industrial. I wanted something “Mad Max” like.

In our city their are mines everywhere. Problem is trespassing. More on that in a minute.

I set up the car before the sun dropped: 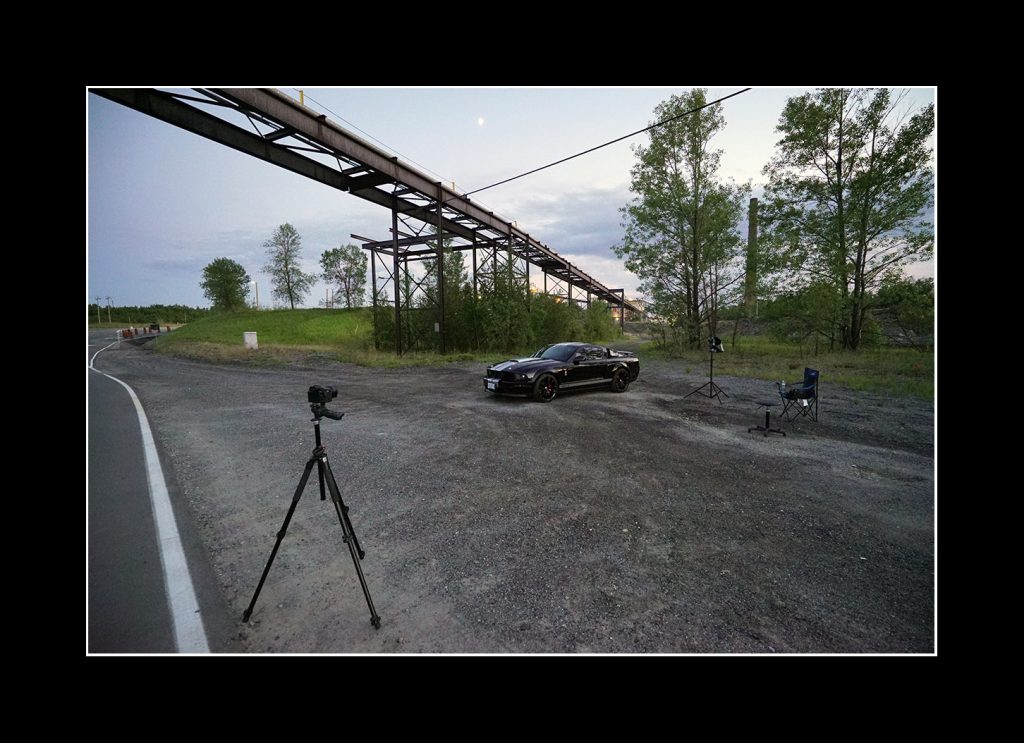 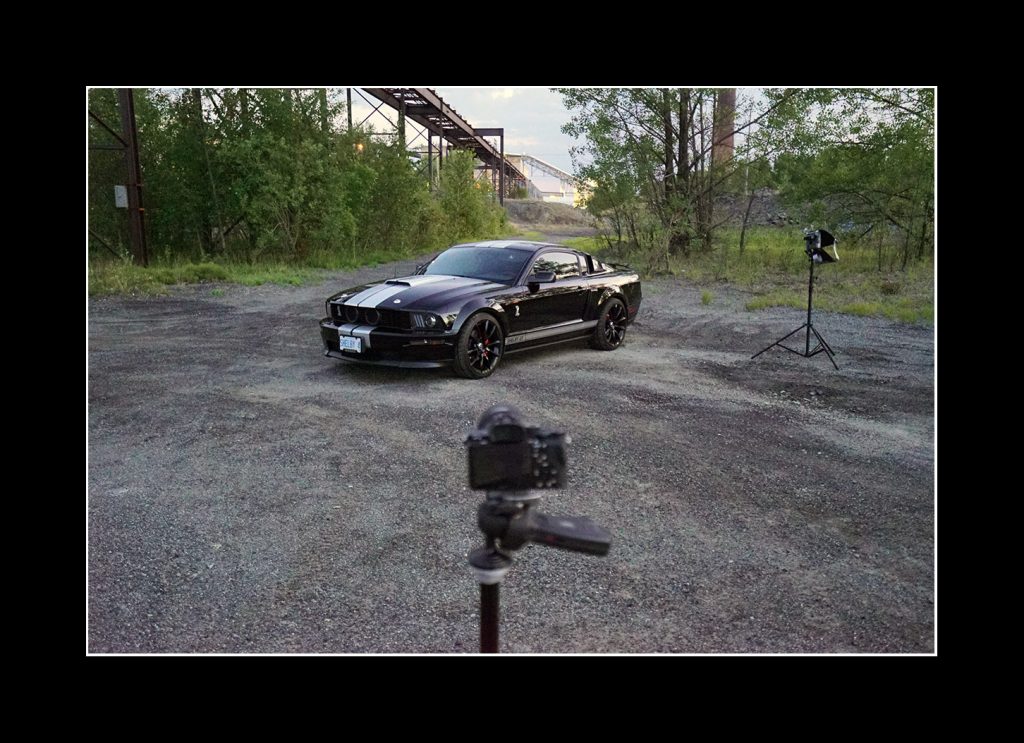 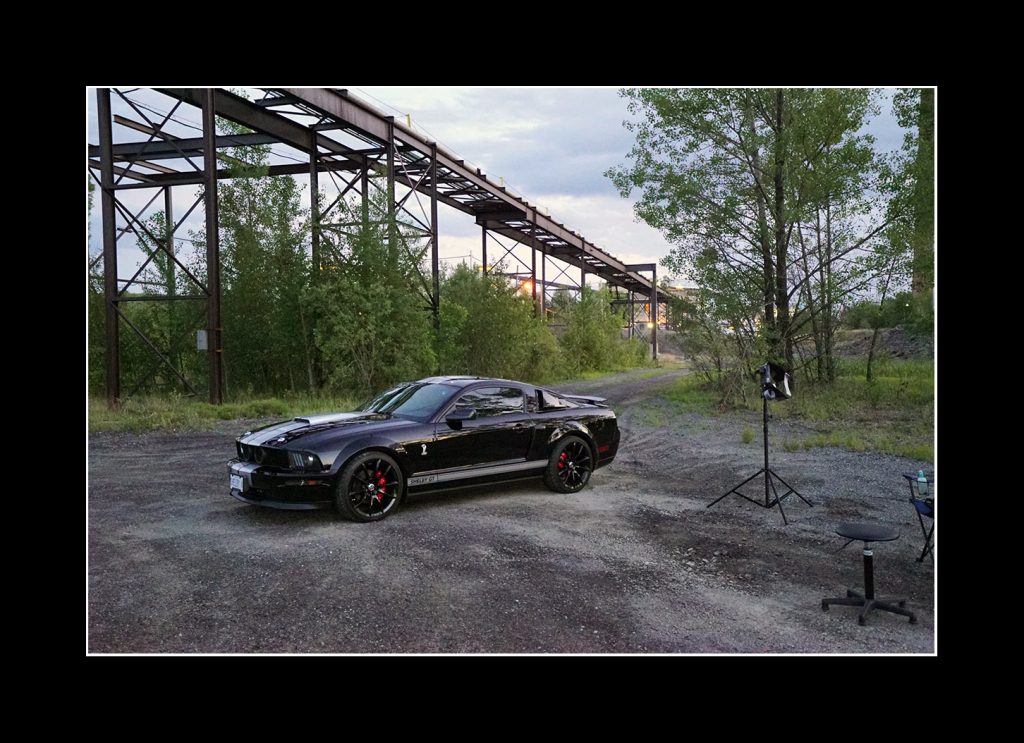 The camera is locked down and not to be touched during the shoot. Each exposure is fired by my assistant using the Play Mobile app made for the Sony system.

It works off my Android and does the job just fine, showing us a preview of each exposure should we need to inspect as we go along.

Here’s the area we decided on. Still light in the sky. 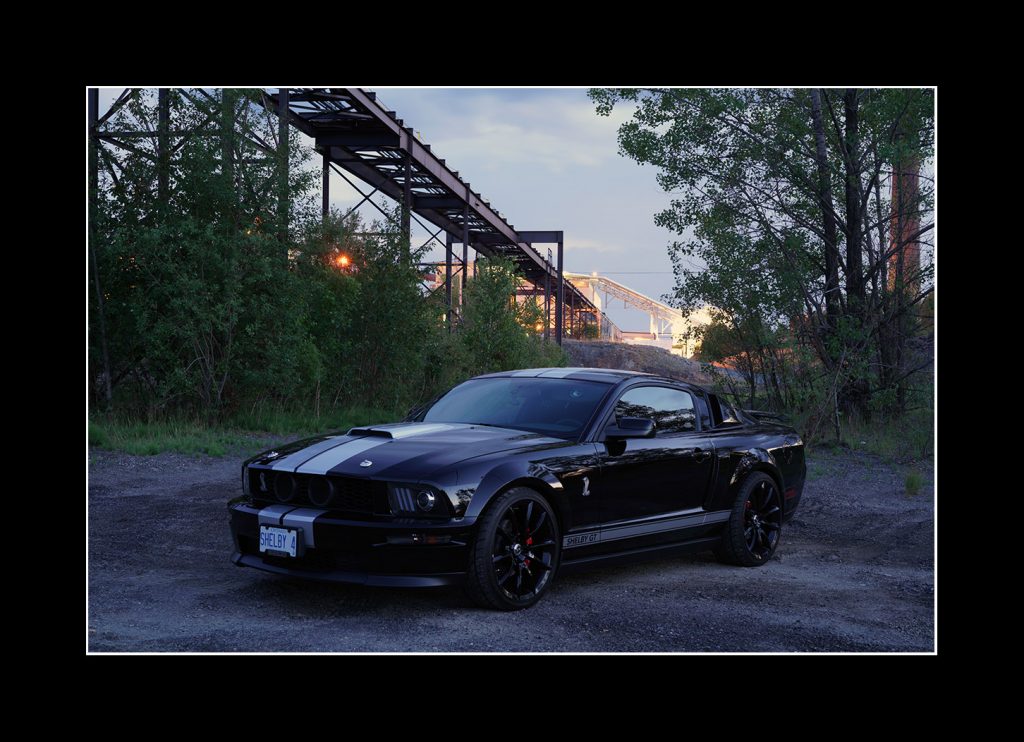 I started painting the ground under the car. You can see the sky show up when in fact is was quite dark to the human eye. This didn’t matter for these exposures since I was planning on only using the area under the car.

You can see blurred out parts of my body as I was moving around, “painting” the ground. 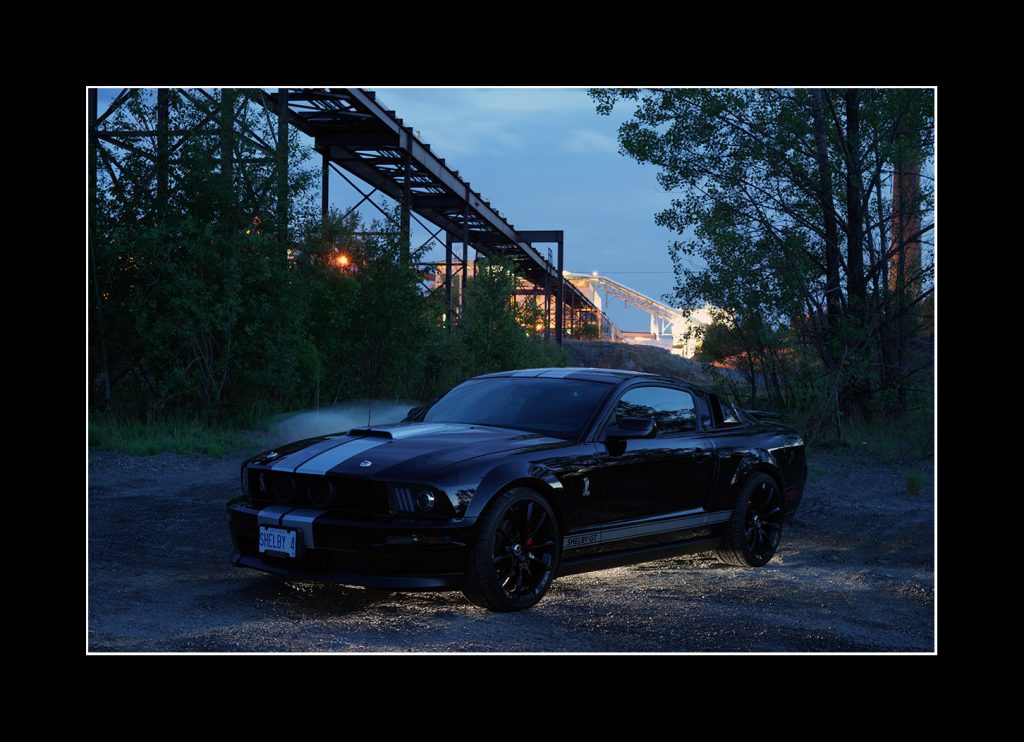 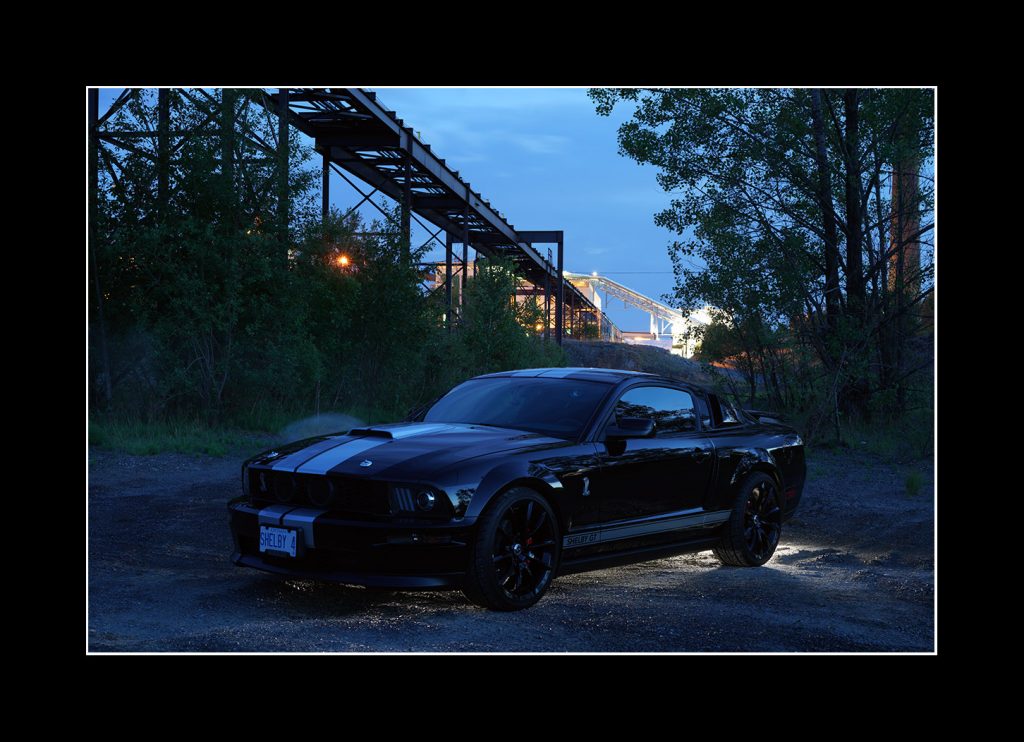 After two hours, over 40 exposures, a few mosquitoes and an encounter with the security guard-who told us to get out- this is what I created. Most of the magic happens in photoshop, as I brought in each image and erased only what I needed. I also added color to the light under the car.

It’s not perfect, and I had to sneak in one last 30 second exposure to paint the tires, with the security guard glaring over me (I whispered to my assistant..” quick, fire the camera one last time”..and I gave each tire about 10-15 seconds of light so I had something to work with in that area.) but it worked out nevertheless. 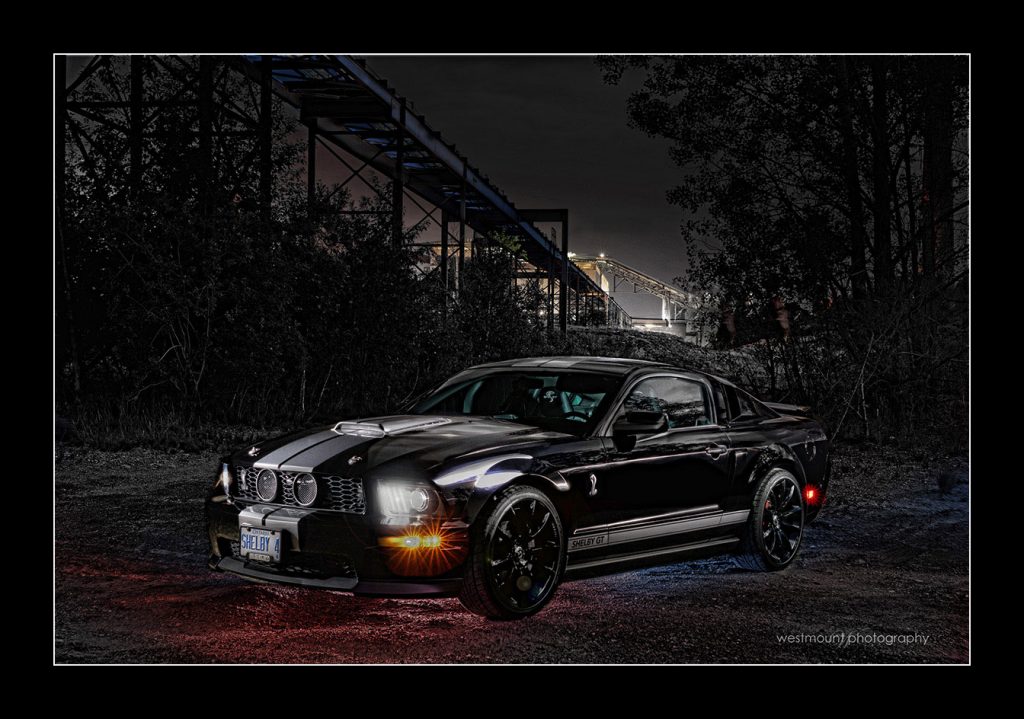 What I discovered was: 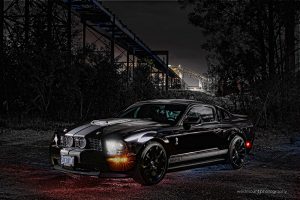 Above image is my first attempt at light painting.

Flawed, yes. But I’m learning.
And I didn’t even take the John Hartman light painting workshop…..yet.

I plan on attending one of his workshops. Because this is one of the coolest photography techniques I have ever encountered.

This guy is onto something. You may recall last winter I interviewed John in one of our Mastermind Meetings.

The replay is in the forum HERE

I learned enough just from that webinar to make me dangerous. This, in my oh so humble, yet accurate opinion, is one of the most legit and valid photographic strategies available.

It separates the sunset shooters from the real light painters.

John just announced some new dates for five new workshops….maybe coming to a town near you?

And don’t forget (in 2 days) Thursday, Aug 17th, 10:00AM EST we’re starting our first in the Secrets to Sales Success series. DETAILS HERE

School is never out for the pro.
yours in success and in photography

I’ve done hundreds of interviews and webinars over the last 15 or so years. The vast majority were top notch, relevant information on lighting, posing, marketing and over all general success when running a professional photography business.

Last night’s webinar with John Hartman was no exception.

I’d even go so far as to say it was exceptional. It had all the right ingredients…a relevant and timely topic that revealed a photographic strategy creating excellent results, a well rounded and informed speaker and questions from the attendees that seemed to flow. So much so I was tempted to ask John if he “planted” some of them.:)

Regardless, the Light Painting presentation with John Hartman was just what the doctor ordered. This is not an “easy” technique.  But the results speak for themselves.

It’s refreshing to see the craft lifted into the realm of art, quality and technique.

Miles above from the “plug and play” mentality that has been so pervasive in the industry these days of “HDR”, “fix it in RAW”, photoshop actions, lightroom presets, frequency separation blending bla bla bla….and other art psychosis inducing plugins.

John’s workshop page and list or resources for photographers

The replay is in the forum Login and wacth HERE

Not a member? Check it out.

One On One Coaching

Exposed: the Truth to running a photography business